Need to add some spice to your new year’s resolutions? Bored with the regular ol’ bucket list. Then check out Inside Tailgating’s 10 Best Thrills for your tailgating to-do list in the new year. Check out the complete edition of our fall/winter issue. These are 10 places or events you’ll never forget, including five you might not have thought of and five you probably have but might not have hit yet.

But you better go fast. The Raiders’ lease with the Oakland Coliseum is up in two years and the team has gotten approval by the NFL to move to Las Vegas as early as 2019, or when their new stadium opens in 2020. Shiny and new are hardly words you associate with the “Black Hole,” the South end zone section where Raiders fans don face paint and metal spikes worthy of a Kiss concert, and strike a little fear and ferociousness into the game, not to mention their pre-game parties. We’re with Tom Hanks, a diehard Raiders fan, who said, “You cannot take the Silver and Black, put them in an air-conditioned dome in the desert, make them play on artificial turf within a stone’s throw of the fountains of Caesar’s Palace, and call them the Raiders.” So go share in some Raider revelry before they morph into something else.

What’s not to love about the “tricky triangle?” Pocono may not be the biggest or most storied track in NASCAR but you’ve got to admire its uniqueness. Where else are you going to find “Long John,” the 1,000-stall toilet facility designed to eliminate the traditional sports nightmare – a bathroom line. According to the Pocono website, “We have no illusion of becoming the biggest, richest or the most famous racetrack in the world. All we want is to be the prettiest, friendliest and cleanest, and to have fun along the way with all of our loyal fans these past 32 years.” The rebuild of 1990 brought the “Paddock” where fans come within 56 feet of the stock cars. Another cool thing is how green Pocono has gone. In 2010 Pocono became the largest solar-powered sports facility in the world after installing a 25-acre “solar farm,” which powers the racetrack and another 300 homes.

Three years ago, the league decided to take its NFL Draft on the road and outdoors after holing it up for 50 years in New York in places like Madison Square Garden. Fresh air, especially in April, has proven a much better alternative. More than 200,000 fans gave their approval two years ago, showing up over the three-day event in Chicago – its second year at Grant Park – and more than 100,000 lined Benjamin Franklin Parkway in Philadelphia for the first round alone this past April. It’s a great way to get a three-day fix of football in the offseason, meet a blend of fans from every team, and say you were there, when the next big star became a member of your team. The 2018 locale is still up for grabs, but Dallas and Philadelphia are front-runners.

This one might come from out of left field but shouldn’t it? Cooperstown, N.Y. is a little slice of baseball heaven, and it’s never more vibrant than when new Hall of Famers get their own piece of immortality. July in the foothills of the Catskills Mountains is downright pleasant. The legends parade down Main Street on Saturday gets you up close to baseball’s biggest stars. A visit to the Hall of Fame Museum is like taking a trip back in time, as is the whole weekend really. Camping or RVing is probably easier than booking a hotel or bed & breakfast, especially in years with large induction classes. That just provides all the more impetus to get up early Sunday to reserve your space in the beautiful green pasture behind the Clark Sports Center for the ceremony.

Anybody can tailgate a run-of-the-mill NASCAR race and make a weekend of it. But what about tailgating for a race that lasts from sunrise one day until sunrise the next? 24 Hours of Daytona in January will test your tailgating will, your grocery list, not to mention how well you get along with your fellow tailgaters. This is not for the faint of heart – especially if you don’t have access to an RV – but part of the fun too. Daytona has readymade places for both RVs and tents. Sleeping some should be fair game, though not exactly easy with the roar of engines close by. The drivers get to tag team, so we think tailgaters should too. Just make sure everybody is up for the finish. How often do you get to cook breakfast on your grill? 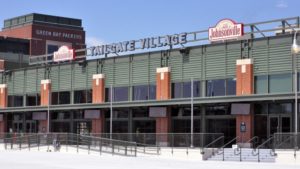 Tailgating for a Green Bay Packers game is storied and special. People are friendly – even to opposing fans – and the beer and brats are second-to-none. Yes, there’s a good chance the weather will be cold too, maybe even frigid. But the Packers have built the new “Johnsonville Tailgate Village” which opened this summer, for any thin-skinned visitors from the south or fans looking to tailgate without the hassle. It’s 13,242 square feet of indoor space, complete with live music, Packer alumni autograph sessions, 35 plasma TVs and whatever else you need to get psyched up for the game. It’s also free admission for fans with or without game tickets.

Granted, it’s hard to find a bad tailgate in SEC Country, but The Grove is the one to beat. And Ole Miss has actually had decent football in recent years to match its party scene. The Grove attracts some 100,000 fans each game to a sea of tents in a picturesque 10-acre on-campus setting beneath oak and maple trees. Oxford celebrates the charm of the Old South, with patrons in pearls and neckties, serving on silver platters and mingling beneath tent-adorning chandeliers. Ole Miss also prides itself on bringing in trailers for a state-of-the-art portable bathroom set-up that is also aptly-named: the Hotty Toddy Potties. 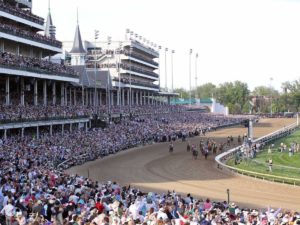 The most exciting two minutes in sports is preceded by one of the biggest parties in American sports. It’s tailgating without the car – unless you are like the diehards who tailgate in lots several miles away before taking the shuttle to Churchill Downs. The infield there has everything you need, food and drink venders, mint juleps and the best people-watching in sports, just for the women’s hats alone. And where else is it downright fashionable to gamble? “The run for the Roses” – the longest running sporting event in the U.S. dating back to 1875 – is a must, as is the mint julep and at least an attempt at singing “My Old Kentucky Home.”

With its short track, steep banks, and 160,000-plus fans packed into the grandstands on the backstretch, Bristol brings pure racing excitement. Did we mention that it’s also loud? The welcoming atmosphere, good camping setup and convenient RV hook-ups make it tailgating-friendly as well. You get a taste of Tennessee in this border town and can still drive across the state line to next-door neighbor Bristol, Va. And where else are you going to see a race hauler parade of some 44 semi-trucks cruising down Highway 11? Talk about a little boy’s dream. It’s pretty cool for grown-ups and NASCAR fans too. 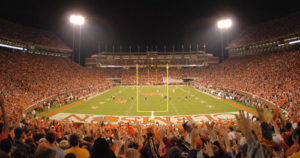 You almost have to see it to believe it, so we think you should. This quaint South Carolina town turns orange every home Saturday in the fall, with excitement growing every hour until the team bus unloads the Tigers at the top of the west end zone in “Death Valley” and players touch Howard’s Rock before running down the hill to ear-splitting roars from the crowd, a canon shot and about the 15th time you’ve heard “Tiger Rag” already. An orange city of some 100,000 people on game days turns this quaint Clemson town of 13,000 into a tailgating hotbed that, for many, lasts from sunrise until Sunday morning.