I was all set to come home from the Duke-North Carolina football game last weekend and write something light and pithy about my tailgating experience. Hey, I’m a Dukie and it’s not exactly the Alabama-meets-LSU party scene, but for this 40-something mother of three, it’s a really nice way to escape to my alma mater and spend several hours visiting with old friends and introduce my oldest son Wade, 2, to college football. And it didn’t hurt that Duke took care of business against our biggest rival! 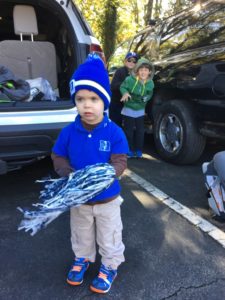 But then I got to the tailgate….and within a few minutes of our arrival, the 2-year-old granddaughter of one of my tailgating friends got loose and ran in front of a car passing by. If not for several people shouting, the grandmother running out in front of the car and nearly getting hit herself, the defensive driving of the fellow Duke fan, and the grace of God, we could have had a tragedy on our hands. The thought just never occurred to me how easily that could happen, but of course it could by the very definition of what we were all doing! Having a good time while not paying all that much attention in the middle of a parking lot! Kind of makes you wonder why it doesn’t happen more often, doesn’t it?

Instincts kicked in in the moments that followed and I grabbed by 2-year-old son, who luckily is pretty good about sticking close by his mom and dad, at least in unfamiliar places, and plopped him down in a chair and put a plate of food in his lap. Then, kneeling beside him, I caught my breath. Everybody tried not to let the incident change the mood of the festivities and kept going forward, but the moment really stuck with me. I also have 1-year-old twin sons who stayed home from the game Saturday, in large part because four hands (belonging to my husband and me) is not really enough to handle three toddlers on an occasion like that – and because they are better off napping twice and enjoying their grandmother’s company in Charlotte than making an all-day trek. But in the next few years I’m going to want them to come and experience a football game, and tailgating, and what then? 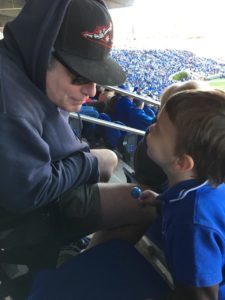 And what if my 2-year-old had been the one getting loose Saturday? Was it a not-so-subtle reminder that I can’t just count on him sticking close by me? And what about all the kids out in the lots that afternoon throwing footballs and having a great time, and not paying all that much attention to drivers who were entering the parking lots focused more on looking for a parking space than a deep pass? And what about after games, when alcohol consumption might be an even bigger factor for tailgaters and drivers? In a perfect world, parents of toddlers and drivers aren’t getting drunk, but that’s not always how it goes.

I love the free roaming nature of tailgates and the way there aren’t a ton of rules and regulations – not at Duke yet anyway! – and I don’t want to see that change.  But I also don’t want to see anybody get hurt. At this point, I have more questions than answers, but it’s something I’m going to be thinking more about going forward. For now, I think the No. 1 way we can protect ourselves, our children and other people’s children is to be more aware and alert in tailgating lots. So consider this blog a first step toward that end.

And in the meantime, go Duke! 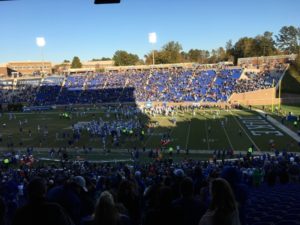