Tailgating for Monday’s solar eclipse? Bring it on

You want to talk about a once-in-a-lifetime tailgating opportunity? Not only is tailgating for a solar eclipse unique and pretty cool, the chance to do it is rare too. According to NASA, this is the first time a total solar eclipse will travel coast to coast over the continental U.S. since 1918. 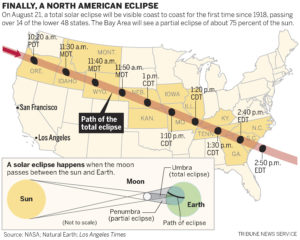 We won’t see another total solar eclipse in the U.S. until 2024, which isn’t as far off as it might look when you glance at the numbers in that date (yikes!) But you have our Inside Tailgating permission to seize the day Monday, pack up some chairs – forget the tent at least for a portion of the party – and catch a view of the eclipse with some of your closest friends. This applies to you especially if you are lucky enough to be in the 14-state long, 70-mile wide path from Oregon to South Carolina that will get to see a total eclipse. Those of us who live in the southern part of North Carolina will get to see a not-too-shabby 98 percent eclipse which is enough to get this gal to stop doing what I should be doing for a while and head outdoors in the middle of a Monday afternoon.

Don’t want to organize your own tailgate? We’ve compiled a list of some eclipse tailgates that we found, but check out your local museums and parks for more information.

Check out this video from NASA to help get you prepared for Monday’s eclipse: